Our newsletters and visit reports

In addition to the latest quarterly letter, you will also find on this page the archives of past letters, downloadable in pdf format (Acrobat), the latest visit reports from our director and the external evaluation reports.

LETTER TO FRIENDS OF SISTER EMMANUELLE

« When the breath of the Spirit dwells in a man, he fears nothing, not even death » (Sister Emmanuelle)

Before writing to you, I was waiting to hear from Jean Claude François, in charge of the programs we support in Haiti.

Since September 13, after the decision of Ariel Henry’s government on fuel price hikes, the country has been once again shaken by violent demonstrations, looting and arsons (in particular of a World Food Program warehouse).

The city of Hinche, where Jean Claude had been staying since the beginning of July, has not been spared by this social turmoil.
The day before yesterday, Jean Claude wrote to us: “This week, there have been three days of demonstration. On the second day, 40 000 people (that’s 27% of the city's population) demonstrated peacefully. There were many students, but also unemployed people and politicians. Since the end of the third day, the bandits have taken over and are making the inhabitants live a nightmare. Day and night, they shoot everywhere to create panic and “to draw attention to the plight of the poor”. As I’m writing these lines, I can hear gunshots here and there.
Public and private transport are paralyzed as the roads connecting the country's cities are blocked and the deserted streets are littered with pieces of glass and huge stones. Although closed, food stores have been looted. Several shopkeepers were killed trying to protect their goods. Frightened, the inhabitants are staying home. The Secretary General of our university Jean Price Mars was shot last night leaving my house after a long day of work. He is safe and sound but still in shock.
My return flight to Geneva is scheduled tomorrow at 12:25 p.m. but the roads are blocked, flights are canceled and the airports closed. Some countries in Europe and America have urged their nationals to leave the country. Embassies and consulates are closed in the country.  Public services, hospitals, banks and churches alike. Closed and under close surveillance, gas stations are threatened with arson.
Several police officers have died trying to protect people and goods. It is said that the bandits are better armed than them. These events that happen in Hinche are happening in almost every city in Haiti. They make me think of this sentence of Jean-Jacques Rousseau: ''When the people have nothing left to eat, they will eat the rich''.

As far as I know, we haven't suffered any damage so far. All of our offices are closed and staff are staying home. »
Thank God, yesterday we received this short message: “I'm on the plane from Cap-Haitien to Florida. I traveled all night on a motorbike taxi and was ransomed ten times at barricades set up by armed and hooded bandits. »

Yet, a month earlier, Jean Claude had sent us some encouraging news: “Last Sunday, an extraordinary event took place in the town of Hinche for football lovers: the team of our university won the university championship of the Central Plateau. It started in April. Several matches have been postponed for security reasons. The final match took place in a stadium crowded with young people under heavy police surveillance.
During those four months, our champions challenged eight other teams and beat them all. Yesterday, during the evaluation of the championship, each player received a reward equivalent to one-year tuition fees. These matches have been entertaining breaks to our students who came in large numbers to support their favorite team. 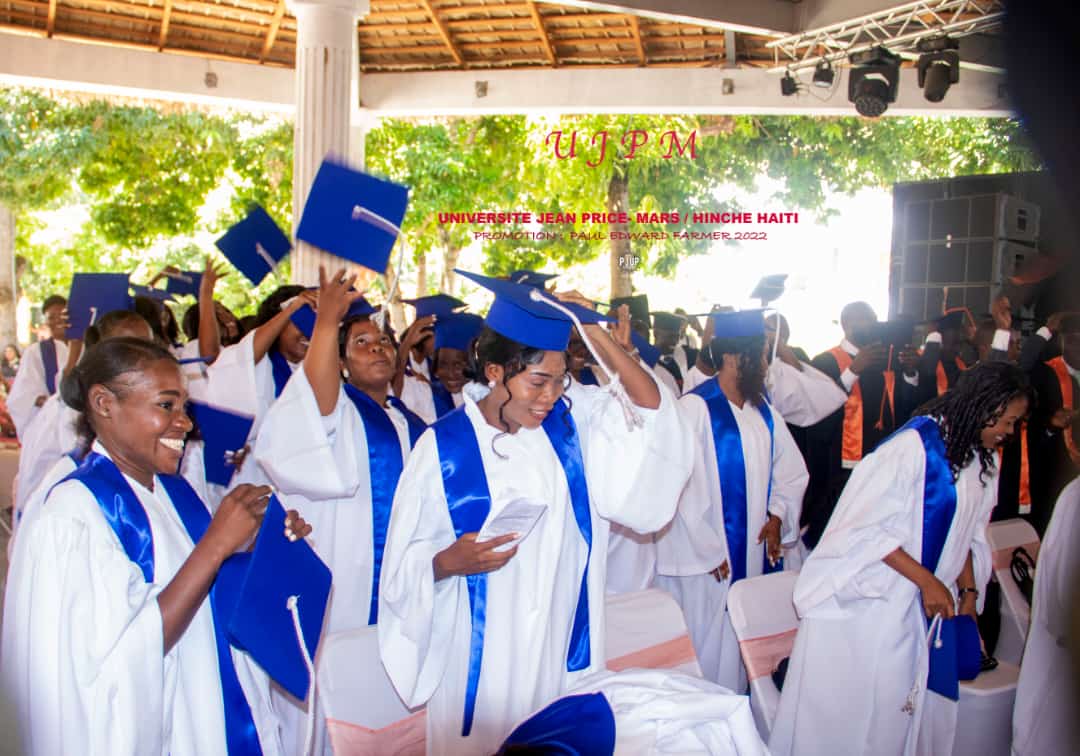 At the beginning of August, Jean Claude had written to us: “Last Sunday, after four years of study, 95 students received their diplomas, during a beautiful ceremony attended by more than 1,000 people. There were parents and friends of the students, as well as leading figures from the Central Plateau.
We have therefore graduated 34 nurses, 20 managers and accountants, 24 civil engineers, 10 agricultural engineers and 7 theologians. The top 50 received a prize from a local MP.
Several of them got a job offer during the ceremony from bosses who were there. The winner is a farmer's daughter, a scholarship student who could not afford her tuition fees. »

In South Sudan, Betram Gordon Kuol – the Coordinator of the programs we fund - is unfortunately also confronted with the violence and lawlessness that reigns in the country.
Since the beginning of July, the smooth running of the programs located in Nyarjwa (the Saint Vincent Health Care Center and the pilot farm) has been undermined by repeated blockages of the site by armed and violent young members of the local community. These unemployed young people demand that our local partner build them a meeting hall in the village. To explain this conflicting situation, it should be noted that according to the Constitution, land belongs to local communities, not to the State. Now, some residents are less interested in the benefits linked to the programs of our local partner than in those they could obtain from the sale of plots of the land that the community has allocated to it, according to an agreement signed with the chief, now deceased.  Considered too conciliatory by the young thugs, the current leader found a grenade in front of his door in July!

I will give you more news about our programs in our next newsletter.

How to show support for Jean Claude, Betram and their local teams, whose dedication and courage command admiration?

Dear Friends, a donation from you, whatever the amount, would be a beautiful sign of friendship and solidarity.

In Switzerland, your donations are tax deductible to the extent determined by the State.

Salary for a teacher

You fund the full cost of one hour of operation of the Saint Vincent Health Care Centre located in a remote location in South Sudan.

You offer 1 masonry tool kit to a graduate of the Lologo Vocational Training Centre in South Sudan, to enable him/her to start working independently.

See all our programs

Do not miss our news:
subscribe to the quarterly newsletter !